This is the second article in my series for Piano Professional Magazine, published by EPTA (European Piano Teachers Association): a teacher’s publication, for which I write the technique feature. You can read the first article, here, and in Part 2, I look at different methods of applying certain fingerings, offering various options  for students.

Firstly, I return to reiterate perhaps the most vital concept when learning to finger fruitfully, and that is the assimilation of scales, arpeggios and broken chords; if students have thoroughly learnt these patterns, then adding fingering to most piano pieces will feel simple and natural. This point cannot be stressed enough, as without these symmetrical note patterns and their fairly rigid fingerings, pupils simply won’t be able to grasp the basics of piano playing. If your student hasn’t been taking exams, it might be prudent to suggest the acquisition of a scale manual – both the ABRSM and Trinity College London publish separate volumes with all keys, scale permutations, and fingerings.

Smaller hands inevitably struggle with certain elements, namely wide intervals and large chords, which can be challenging, particularly when playing extended passagework. Fingering must be very carefully applied when taking this fact into consideration. Sometimes the only option is to ‘rearrange’ passages, leaving out notes which don’t disturb the flow or the construction of a piece. Adding a spread chord where the original is too large, or rewriting chords in some cases, may provide a simple solution. Dividing passages between the hands is another beneficial tactic. It may appear as though cheating, but it can be a workable option if the sound and character of a piece remains largely unaffected.

This passage from Study No. 49 of Czerny’s Art of Finger Dexterity Op. 740 illustrates how the fourth finger, if implemented scrupulously and only with a relaxed or loose arm and wrist, can be an excellent method of moving quickly around the keyboard. 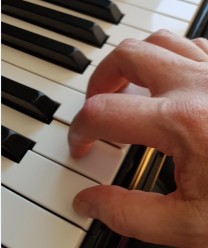 This fosters firmer finger and rhythmic control. However, flatter fingers can work well too, for chords, especially those on black notes, and they are generally more conducive to achieving a completely different timbre. Some impressionistic repertoire might be best played with this approach.

Two notes, one finger! An effective tactic for large chords, such as the following, which employs a spread thumb: 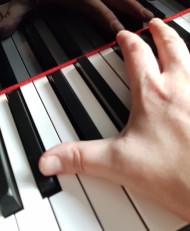 Chopin Prelude (Op. 28 No. 7 in A major), is easier to grasp when using the thumb over the C sharp and A sharp:

This also works for white notes:

And, for certain repertoire, playing ‘in the crack’ might be a practical alternative:

Two fingers playing the same note can have a real impact on certain passages, carrying more weight and drama, and the thumb is also able to support the other fingers creating a deep, rich sound.

The thumb might also be extended slightly when playing back notes, therefore avoiding mishaps involving slipping off or missing notes (example below, to the left):

Fingers have their own character and personality, and, again, this is a very personal element when considering how fingering might be applied to a passage. As a general rule, the thumb and possibly the third finger appear stronger than the others, perhaps due to their positioning on the hand. We aim to encourage students to ‘strengthen’ their fingers, but realistically everyone’s hand is different, and this applies to finger strength as well. I ask students to examine their fingers, observing how they work at the keyboard, deciphering which they feel is the strongest or most powerful. Once then have done this, they are in a better position to work at instigating a more secure technique; developing power in the fourth and fifth fingers especially. However, this must be done with great care, using flexibility in the wrist, arm and hand so as not to cause tension issues.

Finger pedalling is a topic which must be mentioned here. It’s not pedalling as we know it, but it does create a similar effect, as if depressing the sustaining (or right) pedal. The technique of finger pedalling is essentially the over-holding of notes i.e. holding down the keys whilst continuing to play other notes over the top (or underneath). This was a popular technique used for the harpsichord and other early keyboard instruments before the pedal was invented, and as a result it is often synonymous with Baroque music. Before the sustaining pedal (which was implemented from approximately W.A. Mozart’s time onwards), holding down the keys was the only way of sustaining the sound. The following is a well-known example:

Here, the two lower notes in J. S. Bach’s Prelude in C major (No 1 from the Forty-Eight Preludes and Fugues Book 1), are held, as the top line (played by the right hand) plays the melodic material. This example has been ‘written in’, but it’s often the case that a player must use their own artistic judgement when employing this technique.

You can read the original article, here: