Melanie’s work has been highlighted by piano teacher associations around the world, particularly in Australia; the West Australia Music Teacher’s Association, and the Music Teaching Association of Queensland, have featured articles in their respective journals. Currently, she writes a feature technique article for European Piano Teachers Association’s (EPTA) flagship UK publication, Piano Professional, having penned over 20 articles over a period of seven years. Since 2013, she has been a regular columnist for Pianist Magazine, writing a ‘How-to-Play’ piece inside every issue, contributing over 40 articles, and she also writes for their online content, too. Most recently, Melanie has written a composition column for Music Teacher Magazine.

Co-written series include the ABRSM Piano Notes series (published by Rhinegold) as well as the performance notes for the London College of Music examination syllabus (2018 – 2020).  Most recently, Melanie is a guest writer for the Music: Ed UK Website and she writes a series of articles for the Tom Lee Academy Website (based in Hong Kong).

The Pianist as Composer: An Interview with Melanie Spanswick: An interview about composing for the No Dead Guys Blog March 2019

Focus on Piano: Exploring Bloodroot by Rachel Grimes from the Grade 7 piano syllabus. A feature article for the London College of Music Examinations Magazine, September 2018

Playing to Your Strengths: a guest post for Jessica Duchen’s Classical Music Blog, May 2018

Teach Your Children Music with a Touch of Pianissimo: Daily Telegraph, May 2015

Belgrade is One of My Sweet Homes in Diplomacy & Commerce Austria Magazine, and written by Aisa Ijiri, March 2020.

New Music: A journey to a ‘slightly different place’: Facts & Arts website November 2014. Written by Michael Johnson. The same article was published in the November/December of Clavier Companion.

The Cricket and the Bumble Bee by George W Chadwick (Issue 116, October/November 2020)

‘Melanie brings a deep musical understanding to all her work, with loads of useful practice tips, book/product profiles, and guest authors.’ 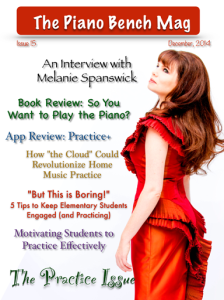