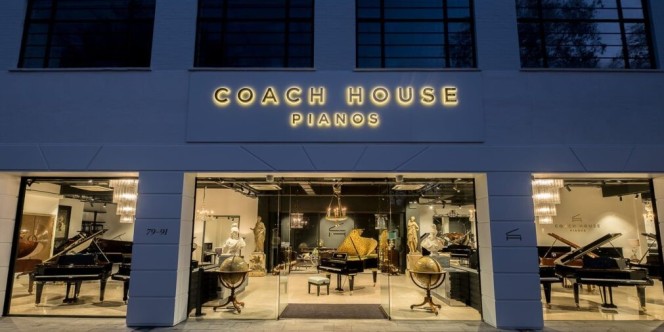 Just along the New King’s Road in Chelsea, London, stands an impressive white Art Deco building. Such buildings, generally constructed in the early part of the Twentieth century, frequently exhibit a certain majestic quality, even if they also tend to harbour a faded grandeur. This particular building, however, is the renowned Talisman building. Constructed in the 1930s, it was originally a petrol station and garage, and, after being extensively refurbished, is currently the premises and showroom for Coach House Pianos.

Already a long-established company, Coach House Pianos opened its doors in South West London on November 4th 2020, offering prospective buyers a vast selection of new and reconditioned instruments, all housed in this elegant yet cavernous building.

I visited Coach House Pianos for the first time this week. On entering the shop, one is immediately struck by the variety of pianos on display, from antiquated historic pieces to much newer instruments; this flagship store is also home to Bösendorfer Hall, and there are a plethora of new and older Bösendorfer pianos to explore.  Those who appreciate ornate decorations will particularly enjoy this space, because it’s festooned with various crystal chandeliers, grand pillars, intricate candelabras, sumptuous gold statues, and an abundance of opulent mirrors.

Wandering around, it’s possible to spot a few unusual instruments such as a Steinway once owned by Queen Victoria; apparently a gift to her husband, Prince Albert. A beautifully painted Pleyel piano has been carefully placed at the front of the showroom, which, whilst it probably doesn’t function as well as it once did, is certainly a show-stopping piece.

Dedicated to music education, Coach House has an established website The Pianist Platform, encompassing disparate events, both online and ‘live’, all hosted by its artistic director Russian pianist Yulia Chaplina. This platform seeks to offer opportunities for various educational projects,  performances and master classes which run throughout the year. This week, students from Eton College were the beneficiaries.

I’ve taught the piano at Eton College for over two years, and can attest to the very high standard of piano playing which pervades the piano department, under the direction of Gareth Owen, who is head of keyboard.

On Wednesday this week, four outstanding Eton College students performed a short concert at Coach House, which was given on two large Bösendorfer instruments, in the small recital venue which is set-up for such occasions (see photo below).

The concert was followed by a brief interview, hosted by Chaplina, in which all four students gave an account of their piano studies to date. After the performance, distinguished Russian professor Dina Parakhina, who is professor of piano at the Royal College of Music in London, The Royal Northern College of Music and Chetham’s School of Music (both situated in Manchester), gave a short master class. 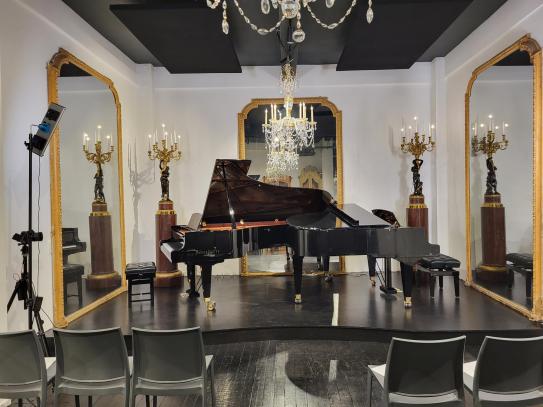 The evening began with Lucas Zhang who performed the first movement of Schumann’s Piano Concerto in A minor Op. 54, with Gareth Owen providing the orchestral part at the second piano. Zhang was to perform this piece as part of the Concerto Prize at Eton College the next day, so in her master class, Parakhina deliberately chose her words carefully in order to encourage a favourable outcome at the competition. However, she gave most interesting comments regarding sound, and the shaping of phrases. Tingshuo Yang was next to play. He offered the first movement of John Ireland’s underplayed Piano Concerto in E flat major, again accompanied by Owen, which Yang was also preparing for the Concerto Prize.

Pascal Bachmann offered a totally contrasting sound world to that of the Ireland, with an account of Debussy’s Cloches à travers les feuilles (Bells Through The Leaves) from Images Book 2. Parakhina’s thoughtful remarks were fascinating, and centred on varied sound timbres and tonal palates – a surprisingly tricky element to implement into this work, but Bachmann was able to integrate some of the ideas quite swiftly into his interpretation. The evening concluded with student Ryan Wang, who performed Chopin’s Waltz in F major Op. 34 No. 3 and this was followed by an exuberant and breath-taking account of Ravel’s La Valse.

The small audience contained friends and family members of the students as well as Coach House associates. Whilst the event was filmed, one future suggestion might be to live-stream concerts and classes, which would allow for a considerably broader appeal. I thoroughly enjoyed discovering the pianos exhibited at this unique showroom combined with a superb student concert and master class, and I look forward to attending again soon.

View all posts by Melanie Spanswick