Today I’m featuring an interesting piece of history, highlighted just this week on the Pianist Magazine’s excellent blog. The world’s first (or oldest) piano recording took place precisely 131 years ago. During this period, Arthur Sullivan (1842 – 1900) was Britain’s foremost composer, and a piano and cornet version of his song ‘The Lost Chord‘, which had been composed eleven years earlier, was the piece of music recorded to capture this moment. 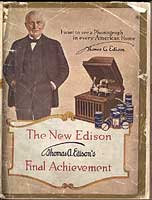 This event took place at a press conference in 1888, hosted by American Civil War recipient George Gouraud, who was introducing the phonograph, a new device for mechanical recording and reproduction of sound, which was created by American inventor Thomas Edison (1847 – 1931). Invented in 1887, the phonograph was the first device of its kind to be able to record and reproduce sound, and it heralded the beginning of a new age for the music industry. Sullivan commented rather ominously on this subject:

You can read Pianist’s full article and listen to the recording here, but, as might be expected, the sound quality is less than ideal!

Many musicians and composers were quick to explore the phonograph’s possibilities, including Hungarian composer and pianist Béla Bartók. Bartók (1881 – 1945) was renowned for collecting folk music, alongside his colleague and fellow countryman Zoltán Kodály (1882 – 1967).

From 1904, Bartók embarked on an extensive programme of field research, travelling around Hungary and Romania, collecting a substantial selection of folk songs, frequently employing the phonograph to reliably record villagers singing and playing their folk melodies. Often considered the father of ethnomusicology, Bartók went on to write down and arrange many of those recorded tunes, and quickly became known as an expert in this field. His subsequent compositions are full of folk melodies, and this music became a fundamental influence on his work.

You can hear one of Bartók’s recordings using the phonograph by clicking on the link below:

A History of the Phonograph: Image link