Love them or loathe them, piano competitions are more popular than ever before and there are no shortage of entrants, irrespective of standard or ability. And subjective as they are, piano contests can fire the imagination, motivating players to reach new heights in their quest for keyboard perfection.

For a professional pianist a competition has a purpose; the winner (or winners) usually has the opportunity to advance in their career, particularly when the prize consists of many concerts and recordings. However, when a competition is for amateurs, such reasoning is less clear.

Last week I spent an immensely enjoyable and rewarding four days in the US, serving as a jury member of the Chicago Amateur Piano Competition, proffering the chance to fully observe a cross-section of adult amateur pianists. Presented by PianoForte Foundation, the competition (which runs once every two years) is going from strength to strength since its inception in 2010. This year fifty-five competitors from around the world competed in this well organised event.

Proceedings kicked off on Tuesday night with a ‘Meet the Judges’ session, held at the PianoForte Foundation located on Michigan Avenue in Chicago. American pianist and composer Adam Neiman, Russian/American pianist Konstantin Soukhovetski, and myself, were interviewed by Thomas Zoells (who founded PianoForte Foundation and is owner of PianoForte Chicago, Inc) about our careers and competition perspectives. This was followed by three and a half days spent in the balcony (with my colleagues) at the main auditorium in the Sherwood School of Music (part of Columbia College), listening to two separate competitions; a two-rounder and a three-rounder.

With a gleaming Yamaha CFX instrument at their disposal, competitors were free to present whatever programme took their fancy; all performances were live streamed. The first two days consisted of hearing fifty-five 12 minute programmes. This was followed (on the third day) by a whole of host of 15 minute recitals (with new repertoire) for the finalists (of the two-round competition) and semi-finalists (of the three-round competition). On the last half day, we heard five three-rounder finalists, who had all prepared a further 30 minutes of music. Many of the players have, by all accounts, demanding careers (including doctors, lawyers, and a whole host of musically unrelated jobs), whilst others were music or piano teachers; the work involved in such preparation by those with relatively little time on their hands, is both impressive and inspiring. 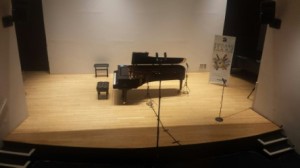 The standard varied considerably; there were those who had never played in public before and were eager to try out a few choice pieces, and then there were the competition past masters, who were visibly confident, self-assured and professional in all but name. It’s no easy task judging such a variety of standards, repertoire, and musical competence. We adjudicated as we might any competition; by choosing those who were interesting musically, had a certain technical grasp, and who literally ‘moved’ us. A strict points system was implemented (taking into account every aspect of a competitor’s performance from musicianship, technique and sound, through to how they presented themselves), and we wrote copious notes accompanying each performance with the aim of providing helpful feedback.

But there were also some less familiar names; Takashi Yoshimatsu, Kosaku Yamada, Benjamin Lees, and two Chicago based composers: Margaret Bonds and Leo Sowerby. The addition of lesser known composers and Twenty-first Century music is always a welcome change, and the Japanese pieces by Yoshimatsu resonated with me particularly. They were beautiful and atmospheric, belonging to the Minimalist style which I love.

Consistency across two or three rounds proved challenging for some, and others found the sudden catapult into the spotlight, not surprisingly, a little awkward. Probably around half performed from memory. We deliberated after each round before selecting the semi-finalists, finalists and winners, but the verdict was always unanimous.

The winners, who all won cash prizes (there were three in each round (1st, 2nd & 3rd)), and those who were awarded special prizes (for particular repertoire groups), demonstrated poise and commitment through each stage. Some had studied the piano to degree level (both undergraduate and postgraduate), with one or two attending junior and evening college division music conservatoire classes. This training was certainly evident.

Firm friendships can be formed; a shared love of the piano, classical music, and a wish to develop their playing further, sometimes instigates an intoxicating camaraderie. After the competition was over, everyone I spoke to had found it a wholly memorable, exciting and satisfying experience, and one which they were keen to repeat.

This piano festival ended with three two-hour master classes each given by Adam, Konstantin, and myself, to selected competitors.

Competitions such as this demonstrate the popularity of amateur music making. Most importantly, they provide pianists with an excuse to play to fellow musicians in front of a friendly jury, receive feedback, and hopefully, discover new music and musical companions.

The Chicago Amateur Piano Competition couldn’t have taken place without careful preparation (over a two-year period) by Thomas and Darcy Zoells, Sally Olson, Giovanna Jacques and an army of volunteers. I thank them for arranging such a wonderful four days of music making and wish them luck for 2018.