I’m really excited to announce a new series on my blog: Pianists From The Past.

We all have our ‘favourite’ pianists; no doubt a smorgasbord of current performers intermingled with some who are, sadly, no longer with us.  But how often have you searched on YouTube, or elsewhere, only to ‘discover’ a pianist you may have never heard before? A pianist who plays with such incredible depth and musicianship, that you wonder why you haven’t been made aware of them earlier. Pianists From The Past will focus on these often- extraordinary players, many of whom have had superlative careers, but, for various reasons, are now no longer remembered. A guest writer will pen each post, spotlighting their chosen ‘Past’ pianist.

My guest writer for this first post is British concert pianist and piano professor James Kirby.  James, who teaches at the Royal Welsh College of Music and Drama, London University (Royal Holloway) and Eton College, studied at the Moscow Conservatoire, and when I asked which pianist he might like to feature in my new series, he immediately chose Viktor Merzhanov, with whom he had a personal connection. Over to James…

I would be as bold as to say that Viktor Merzhanov’s 1956 recording of Rachmaninov’s Third Piano Concerto Op. 30 (with the USSR TV and Radio Symphony Orchestra; see link at the end of this post) is one of the very greatest I have heard, comparable with Rachmaninov himself. The tone is deep, warm and singing, the performance unfolds with an unerring sense of structure and musical purpose and is delivered with absolutely effortless technique. When I first heard it, I was mesmerized. Why on earth is he not better known?

Viktor Karpovich was born in Tambov in 1919 and studied at the local music school (later to become the Rachmaninov Institute) with Solomon Starikov and Alexander Poltoratsky, then at the Moscow Conservatoire with Samuel Feinberg and Alexander Goedicke. In 1945 he shared First Prize with Sviatoslav Richter at the All Union Competition. Richter, as we know, went on to have one of the most extraordinary careers of any pianist, and together with Emil Gilels, dominated the Russian pianistic landscape for many decades.

Merzhanov pursued his career, somewhat in the limelight, but it was a busy one and over the next sixty years he gave over two thousand recitals, many of them in the Soviet Union, but he was widely travelled abroad. I remember him saying with pride that he had been everywhere apart from Africa (maybe a little artistic licence there…) and describing an enormous ninety concert tour encompassing large parts of the Soviet Union and Scandinavia.

He served on a large number of International Juries (over forty) in some of the most prestigious competitions around the world. With a somewhat severe expression and thick rimmed glasses he cut a rather forbidding figure. In the early nineties, I fell victim to him in the Queen Elisabeth Competition, but he was more merciful in the Tchaikovsky Competition. Little did I imagine that I myself would serve as a jury member under his chairmanship twenty years later.

Tambov is a typical small Russian town, four hundred kilometres south east of Moscow. It is pretty in parts, dotted with the gleaming golden domes of Russian orthodox churches and typical old wooden houses. It is a fairly gruelling ten-hour overnight train journey from Moscow. Tambov does have an airport, which was closed during much of the nineties, although, remarkably, during that time, the empty local airport bus still made the journey to and fro from the town centre to the airport.

Tambov feels special.  It is near to Ivanovka, Rachmaninov’s country estate, where the great composer spent his summers between 1890 and 1917 and wrote many of his major works (including the First Symphony Op. 13, and the Third Piano Concerto Op. 30). It must be one of the remotest museums in the world, a two-hour bus trip from Tambov into the depths of the Russian countryside. It is a magical place, especially when the landscape is covered with snow and even more so in May when the birch trees are bursting into leaf and the scent of the lilac bushes pervades the air.

One of the most impressive buildings in Tambov is the Rachmaninov Institute (pictured below), one of the smaller Russian Conservatoires. Rachmaninov is  truly celebrated there, and photographs and paintings of him adorn most of the teaching rooms and the little street behind the Institute has recently been renamed after him. On the river bank there is an impressive statue of the great composer, almost with some fresh red carnations at its feet, whatever the weather). I was lucky enough to develop a relationship with this Institution in the later 1990s and made regular visits to perform, teach and bring students from the UK, including RWCMD and Oundle School.

Merzhanov was Tambov’s most famous citizen and although he lived in Moscow, he had a class of students at the Institute and spent many years making the arduous journey on the train, once or twice a month to teach them, until just a few months before his death. Tambov hosted the National Rachmaninov Piano Competition every four years and I was invited to serve on the Jury with three other colleagues, under Merzhanov’s chairmanship in 2008 and 2012. Cascades of Russian piano music poured from every practice room and the days were sometimes very long, frequently ten hours of music or more per day, but the standard was incredibly high and all the performances took place in their beautiful concert hall (apparently declared the seventh best acoustic in Russia!)

During the Competition, Merzhanov was a modest but quietly authoritative figure. Whilst ‘off duty” he seemed frail, but during the performances, he sat ramrod straight, totally alert and focussed. (No need for him to have a notepad and pencil like the rest of us….!)

A somewhat daunting aspect of the Competition was the Jury concert, where, after a day of listening to spectacular piano playing, we were expected to show our mettle. I must admit to feeling fairly anxious, not only about playing to the contestants, but especially to him. On one occasion, I played Beethoven’s “Les Adieux” Sonata in E flat major Op. 81a. A teacher (whose student we had just eliminated from the Competition) came up to me afterwards and asked me if I had just learned it. But Viktor Karpovich was remarkably warm to me, mentioning my lyrical style of playing and I am grateful that the two comments came that particular way round.

During breaks in the competition, he talked to us about all sorts of things, his love of Tambov, fishing for crayfish as a child in the local river, his passion for Russian piano music, especially Rachmaninov. He shared memories about meeting many of the great musicians and composers, including Shostakovitch and Prokofiev, who gave him some invaluable thoughts on his Ninth Piano Sonata Op. 103 as he was composing it.

He dealt with various intrigues and shenanigans during the competition (a particular characteristic of Russian juries) with dignity and grace, but with unarguable authority. When he was on stage, speaking and delivering the results he gripped the audience with his charisma, and spoke to them with such love and sincerity. The public responded to him with overwhelming warmth, as only Russian audiences can.

There is a website dedicated to the memory of Merzhanov, www.merzhanov.com,  with lots of interesting information, especially a list of his very distinguished students, the British pianist Allan Schiller amongst them. There are a number of wonderful audio and video clips of his playing, some of which are very rare.

As well as Rachmaninov’s Third Concerto, his Scriabin Etudes Op. 8 are effortlessly poetic, and his “Pictures” (given in his last recital, at the Great Hall of the Moscow Conservatory at the age of 88), is a remarkable testament to his playing, delivered with the energy and vigour of someone fifty years younger. It is a masterclass of harnessing total physical relaxation and power.

Try his Moscow recital, given in 1994, with a superb Chopin B flat minor Sonata Op. 35, an ideal union of passion and great intelligence, and a fiery Scriabin Fifth Piano Sonata Op. 53, which explodes like a firecracker:

I feel lucky to have had the opportunity to spend some time with this great pianist and am privileged to have known him a little. 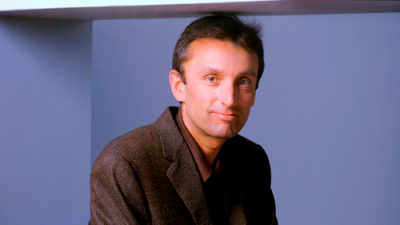